On this trip, we sailed a north-eastern course. The Bermuda Triangle probably still stuck to the captain’s bones. [Report 18] 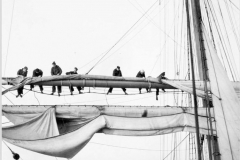 On the other hand, we had to catch all the wind we could, because the fuel supply for the engine was not increased, as long as we did not reach a harbour for replenishing. Whether hitting port on the Azores was considered as an option, I do not know. All I knew was that we were now at sea for almost two months, it was getting colder and that we had passed the Azores in 200 miles distance, according to remarks from the officer on duty at noon yesterday. Then the wind fell asleep once again. It was slow and annoying like the coffee grinder bread and cereal soaked in sugar water. Since the equator, the free watch sat for hours on the railing, hoping that a fish would bite on the string with bent wire hung in the sea, even if it were only very small. We could also see some fish. Just that they would not bite, because no convincing bait was attached. The best we could offer was some crust from our loading-grain bread. The cereal was absolutely of no use. A radio message brought life back to the place: The Russian frigate who’s ID we have been obliged to ignore, came forward and asked for an observation around the horizon.

Because of our tall masts, we can oversee a vast sea area, and that with several dozen pairs of 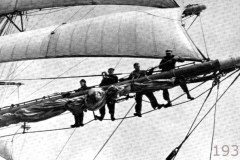 eyes. The most glorious Soviet Union was testing their first space satellite with an animal on board in the early morning hours*). This could fly past in a position approximately 200 nautical miles north-northeast of us at about 1,500 kilometers altitude above the Atlantic. Alternatively it was arranged that the satellite would splash down in the designated sea area on a parachute.

The way communications went in particular did not leak through to us. For us it meant that it is a matter of life and death when a dog is in the device. However, there was no chance to reach the sea area on time, neither tomorrow nor the day after tomorrow, because it depended on the wind which was only blowing in the potential landing area. “No problem”, should have been the answer: “Give us a towing rope and we bring you there in time.”

*) U.S. President Eisenhower had by the end of July 1955 announced the development of an American satellite, after which the Soviet Union announced a similar development four days later, on August 1, 1955,. This was seen by the world partly as a propaganda coup to show the superiority of the Marxist-scientific system over capitalism (Press release, fall 1955). On January 30, 1956 approval for the construction of (Sputnik) was issued. The successful launch on October 4, 1957 at 19:28:34 GMT (October 5 local time) off a big launch pad in Baikonur (now Kazakhstan), therefore, surprised the world. (Text from Wikipedia, Oct 2012) 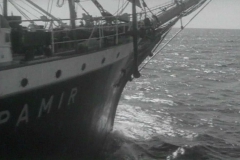 more than 10 cm in diameter was to be laid out on the bow and organize its transfer over to the Russians. The prospect of wind was too tempting. Because of my being off watch, I had nothing to do with it at first, but the news spread quickly. Shortly after that, everything was on deck and ready to tackle with, because all sails still standing had to be hauled up and fixed.

Since the sea was almost calm, one end of the Manila line could be swiftly fastened on the frigate. Then we put out around 150 meters of line and belayed the line on a bollard on the fore-ship to starboard. Slowly the frigate increased speed until the line was taut. It initially went 5 knots, 10 minutes later, 10, and then 15 knots. And it did not take long, and we whizzed through the sea with more than 23 knots. The headwind produced howling sounds in the rigging, and no one remained near the forecastle. If the line tears now, you should be far away. Everything went well, the line did not break! Shortly after midnight, we reached the observation position. The towline was cast off and we recovered it with the windlass which was repaired in Buenos Aires.. 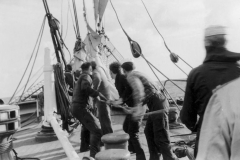 In the meantime, we had been instructed what we should look for. As long as it was dark look for a moving light, otherwise search for a down-going parachute. Then one-half of the “search party” was sent to sleep at four o’clock, and I was among them. When I came back on deck with my watch, we learned of numerous reports about unusual light phenomena and strange flying objects.

As we had taken our positions in the masts, it went on cheerfully. We sighted blazing missiles, unlit cigars and flying saucers from the beginning of dawn and the end of this spooky period. Action should be cancelled about 90 minutes later, which would have been fine for the captain because in the meantime there were good winds. Suddenly many voices sounded: “Sinking parachute including an object in 12-miles, 3 parts (3/32 of 360°=33¾°) to port!” In addition, our companion from the Red Fleet received news, rushed at full speed to the object and disappeared forever without a sound. 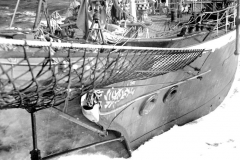 We would never have learned the truth about what had happened; if our radio operator had not been really smart. He had crept into radio traffic of our Christmas and film guests. There he overheard an unbelievable message from (our) U.S. frigate to its control center in New Port, Maryland that they had linked the Russians with a satellite dummy shot into the sky! The Russians steamed furiously straight toward the falling parachute.

This message had probably been intercepted by the Russians, because shortly thereafter this message was sent to their government agency:
“We have prevented the class enemy from making findings about the first test flight of Sputnik. They think we are nuts. We further report that the crew is doing well and is highly motivated about the successful April fool’s joke.”

That our captain commented dryly: “April Fool’s joke? Why not? Now we finally have wind. All hands on deck! Set all sails! NNE course, close hauled to the wind!”