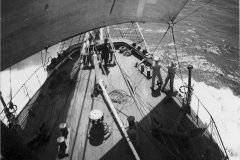 guests were pitted against each other. Never leave the enemies out of sight. Every movement was reported to our own marine monitoring stations. While we had seen South America, a little bit of the country and its people, the cold war in the North Atlantic continued. But perhaps not so grave as it may look from a distance. The festive hour on the Pamir under the Christmas lights on all tops had established a thin thread of contact that brought both vessels back to our location, when we had hardly left the experience with the waterspout behind us

Before nightfall, the two warships rushed towards us. From astern, they were placed back on 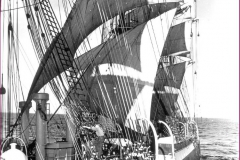 our port and starboard side. Again they asked whether they could pay us another visit, each with a group of 25 sailors, because they were able to agree on one issue. Nowhere in the whole wide world could someone find a bigger screen than the one available on our large lower sails with around 300 square meters of space. They would like to use one of them to watch the latest movies from their countries. They had agreed on this a few days ago, when they heard that we would soon be coming here.
We would however have to 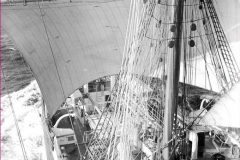 reduce our speed to less than three knots (about 5km/h). Permission was granted for a period of two hours, probably because our captain expected as usual, them marching off at curfew time, at 10:30pm. It took less than half an hour when they came alongside from left and right with several boats and sailors in blue work uniform.

Everyone had something in his hands, under the arm or on his back. This was material, when assembled properly made up exactly two functional film projectors. They stood side by side on the wheelhouse pointing the projectors to the Bagien-aft sail. The yard was then rigged amidships, placed in such a manner that it was transept and the wind filled the sail still firmly. The show could start. 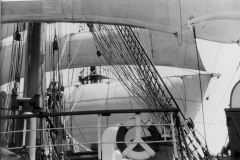 It was actually only started when the East-West opponents had solved the problem of the first in line. Without exchanging words, a coin was flipped between two officers equipped with three gold stripes. The Red Fleet began. They presented the film premiered a few days ago “Ромео и Джульетта” which was simply the story of Romeo and Juliet *), from Shakespeare presented by a great ballet troupe.

*) The ballet was composed by Sergi Prokofiev in September, 1935..

The music squeaked tremendously because the loudspeaker did not manage it, but to see the ballet hover over the curved sails overwhelmed everybody. Also, the frigates were again moving 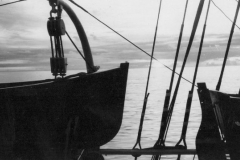 up closer to us, and the decks were full of watching crews.

But suddenly the mood was gone. Our visitors departed well before curfew and vanished off board in a hurry almost in seconds together with their films and projectors. The mystery was solved for us after midnight. In the four- zone city of Berlin, the tension between the four powers had increased to the boiling point: The 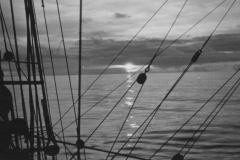 only two months old Army of the German Democratic Republic had been allowed by the Soviet Union on May 1, to hold their first military parade on the Marx-Engels-Place in East Berlin. The Cold War actually took away a third of our High Society” and gave us back our everyday life. We could live with that, our guests also? They have never contacted us again since then.