Report 36: A waterspout for the Third

The third officer, let’s call him Wotan Streit was when it came to an attack on meteorology, 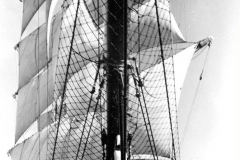 never abashed. He rarely left the many daily weather reports we received without a comment: incompetent, stupid, hopeless. If it was boring and nothing was going on during night watch, you only needed to go onto the middle deck and consult the Third, in matters of meteorology, when he was on watch duty. He taught us willingly, not excluding marked words about the weather people. A popular topic for instance was their inaccurate predictions.

“They do not understand that the oceans are the engine of weather-matters and the continents are weather obstacles. It is all about water in the atmosphere. Where only half of the water volume of the Baltic Sea is globally active, which is completely exchanged more than 30 times per year. The oceans contribute to that with more than 85%.” The Third got particularly excited about that, since the beginning of the 2nd World War the Earth was getting colder, but meteorologists would not make the slightest effort to determine whether the last naval war in the Atlantic and Pacific has contributed to this. Even if the Third seemed to go manic, sometimes his weather enthusiasm was highly admired. That would have almost tragically failed yesterday when he got into the eye of a waterspout. 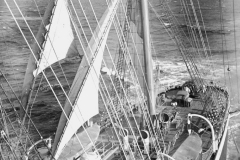 It was shortly after the beginning of the forenoon watch. With beautiful weather and a gentle breeze, almost the whole crew was busy on deck, changing sails, ropes, and staying busy with dozens of other small activities. Suddenly a call echoed through the entire ship: “waterspout 2 points (2/32 of 360°=22.5°) on starboard bow” All looked at it, only one ran and climbed up the foremast with top speed. It was Wotan Streit who wanted to photograph the event off the Royal yard. We sat on deck admiring the funnel, which extended from a low compact cloud down to the ocean surface and whirling up the sea into a white cloud of spray

This is something I had never seen before. First, the formation was probably a mile away and almost stationary. However, it suddenly changed and the trunk came closer and closer very fast. The mainsail was quickly clewed (pulled to the frame) and upper topsail and upper topgallant yards were quickly lowered to reduce the sail area. As an encounter with the waterspout was inevitable, many eyes turned again to our Third. High up in the top, he leaned over the yardarm and photographed. Then the unbelievable happened. Without taking the trunk out of the water, the waterspout formed in 50 meters height a spike, touching the yardarm of the Royal and hence also Wotan Streit. 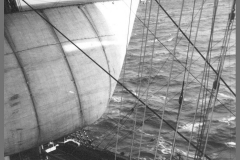 The latter having apparently violated the iron principle to clip a life-belt to the yard, suddenly he found himself in the funnel, about 50 meters above the sea and 150 meters below the cloud and turned in circles, like mad. He slowly rose up. We couldn’t see him anymore, where he was, you could see only extended white in front of the eyes. It took an eternity, and then we saw him again: And he was going down. He seemed to slip down in the tube, only a little, then faster. Suddenly he smacked into the sea. The waterspout moved further astern for a few minutes and then was gone.

The Third was not far from the ship, but too far to reach him with a throwing line. By bracing all still standing sails momentum was reduced immediately from Pamir. At least three lifebuoys were thrown out and a lifeboat was prepared. Until they were finished, both our competitive swimmers Ulf and Norbert had jumped with a rope around the waist off the poop-deck into the ocean. After both had travelled about 500 meters, Ulf remained connected to us with his leash while Norbert’s leash was cast off from deck. Thus Norbert swam further on while his leash slipped through Ulf’s hands.

When Norbert reached the Third, Ulf pulled on the leash and we pulled on Ulf’s leash. The 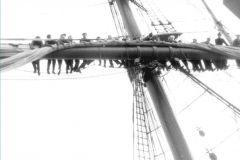 whole maneuver lasted little over 15 minutes, and then all three were pulled out of the water. When the Third was questioned, how it had been, he said correspondingly: “With this rapid rotation speed I was almost in heaven. Then I felt like I was in a shower where the water comes from below. That was so violent that it ripped my camera with lots of great photos into the sky. They would have documented the transport of seawater into the air in a unique way”.
Then the captain said, “During your trip to the sky, you could at least have clarified what is going on with global cooling for the next 15 years. Here back on earth you, Wotan Streit, will be criticized, that you have been in the rig without safeguard!”