Report 34: Lookout on the forecastle and on the yards

Yesterday will be unforgettable to me. There were two events. One just after midnight and was plain stupid, the second in the afternoon, however unusual and heavenly.

Right after midnight, I kept lookout in full duty for an hour on the forecastle. Those were days 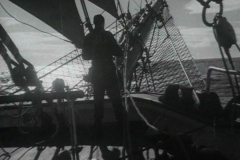 in which we sailed here in the middle of the South Atlantic, in an ocean area where no steamers were seen for 100 years. At 00:30am, I struck the ship’s bell once and reported in the direction of watch officer: “On the forecastle all is well. The lights are burning bright and clear! “Then I looked ahead again toward the North at the star-spangled ocean.

Suddenly someone shouted at me from behind: “You were asleep” I said, “No I did not sleep.” Then him again: “I had my arm moving up and down in front of your eyes. You did not respond” 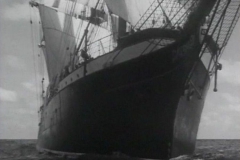 Me: “I’m supposed to look ahead and should not be distracted!” etc, etc. Then he ran down the catwalk to mid-ships and shouted: “He was sleeping!” It was not so funny, unless I had actually been sleeping standing up. Not many can do that.

The lookout highlight came in the afternoon. The second machinist was a keen skydiver and hobbyists. On the last trip, he had discussed with the captain a way to keep lookout on the mast tops. For a dragon, he had stretched parachute material over thin aluminium tubes and a few bamboo tubes, demonstrating the airworthiness for a few minutes on the last journey here in southwest trade winds. Then he said, some design improvements are needed and possible, but the weight limit of the hang glider must not exceed 65 kilograms. 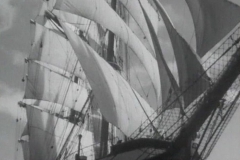 Therefore a selection procedure had taken place for weeks for the upcoming flight test with max. 3 trainees (voluntary and weight less than 60 kg). After drawing lots among six candidates three remained, and I was one of them. I was second in row at 3:30pm, and my flight time according to plan should last no longer than 12 minutes. The whole enterprise was without the slightest effort. It was just like flying a kite on the beach. Two lines were attached 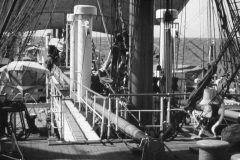 around the waist. One was shorter than 20 meters and was handled by me. For the other line, with over 200 meters in length, two sailors on the Royal yard of the mizzen mast and two more on the poop (back deck) were responsible. The start and rising above the top of the mast was ensured high wind uplift. Due to the huge sail area of the cross-mast’s mainsail (Bagien or cross-jack or mizzen sail course) to the Cross-royals there was a strong, vertical 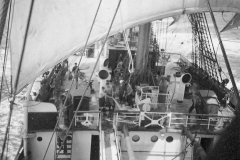 wind shear flowing. Without any problems you began to hover. Then extend the leash, one meter, two, five and ten meters and more. Now you could even go higher than the top of the mast being able to look far into the distance at least 20 nautical miles. You had to watch. It was also clear to me that this kind of lookout did not have any future. I landed safely back on top of the yard. 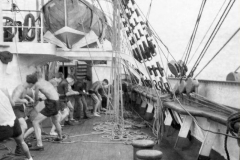 There was no danger at any given time. Only the excitement of experiencing something so great had been huge. As long as we would not loosen the 20-meter line, we could never fall on deck. But should this happen in order to fly maybe 50 meters higher than the masts the flyer would most likely drop into the ships wake and he would have been pulled out of the water on the 200 meter line.

I reassured the watch officer of the midnight watch that same evening: “Up there, I did not sleep either! Only just looking ahead! Isn’t it true?!