Anyway as everything was supposed to go very quickly in Rosario, the hatches were full, almost from the moment the trunks of the silos were swept clean. With so little time available, the cradle of tango would, as it has been rumoured, not be explored by me and many others. How could someone find ways, in one, two, three hours to hip swinging? The pocket money fed from a monthly salary of 50 Deutsche Mark 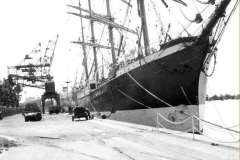 was also too short. Beyond that the fate of the broken windlass determined our next plans. Which fell out as desired: Repair in Buenos Aires. In addition, it could take two weeks this was very welcoming. Day before yesterday evening, after just two days the hatches were closed and we started our journey with our engine to Buenos Aires shortly after midnight. Because we could cast the anchor, but could haul it up, a tug accompanied us.

The river pushed us so hard that we could moor, with a big hello from land and from us, along a quay wall after only 18 hours of steaming. We have already been here for 12 days now. Today I find time to write, as I was denied permission to go ashore after lunch every second day because of an (almost) invisible spot on the shirt. Until now, these shore excursions were beautiful, and once there was even a trip of almost 32 hours to the Pampa far outside the city limits. This was 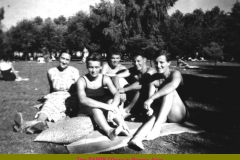 last Tuesday around 2pm. In the suburb of Lujan, several kilometers away from the berth of the Pamir, four trainees and four gauchos were sitting on eight horses, and went riding to the ranch “El Boa Nova”, where we were invited. Initially I almost fell off my horse two times, and then I succeeded well the next three hours of ridding on soft green grass. There were thousands of happy cows, grazing around us. We would probably be confronted with one of those meat heads: steak and mate tea were probably what the Argentines do best, that was my impression after the first few days.
Thanks to the horses none of us took damage except for our rear ends. How well that on this particular day the weather was good to us. Moreover, to be able to speak with the host, in front of a whole cow on the grill, about the extents of the pampas and the seas and to sit with his large family and two dozen Gauchos by the fireside, was full of atmosphere.

In the evening, we ate the most delicious meat and drank mate tea from dried gourds by sucking on a metal straw with a filter below it. You could feel its caffeine but it did not prevent my total fatigue well before midnight. The gauchos went to sleep early as well and thanking to our hosts 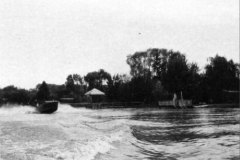 we left early the next morning. It rained cats & dogs. The ponchos that had been given to us by the gauchos generously somewhat protected us.

Except for the screwed up afternoon, I was already ashore five times. Once for a three-hour trip to visit the new sailing ship of the Navy at the shipyard east of Buenos Aires, which partially enlightened my mood. At comparable size as compared to the Pamir there would be around 250 people on board. We went there, altogether 85 men! 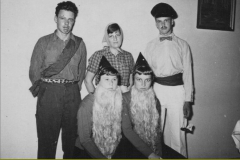 The other times ashore I spent with Ulv and the daughters of the family Winter, sometimes together with their parents. Highlight was the visit to the “Club Rosario” in the Delta del Tigre with a large swimming pool. First, water handball was suggested, then meat, grilled meat and delicious Asado once again. Sometimes we had a picnic in the park, and if you cannot enjoy Carnival in Rio, then you must celebrate Carnival in Buenos Aires, as it happened on Saturday, even if I did not come up to the right momentum. Should one have paid attention to observe Tango in Rosario?

This day is very annoying. The day after tomorrow is probably the last shore leave. Then it’s time to say goodbye to beautiful days, and we will all sing quietly: “I’ cry for you Argentina.”

Go to story 33
Report 33: Mayday for a Troop of Penguins