Part IV:
Journey home from February to May 1956

Report 31: Thanks from ,Commandante’ and the river trip to Rosario

We were quickly relieved of our coal, but not from coal dust. The stevedores worked like hell 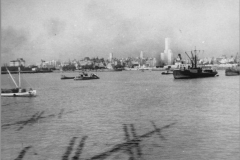 coal, heave after heave, was unloaded within a few days out of our hatches into dozens of barges. After the last lumps of coal, we heaved up the anchor, greeted the stevedores warmly and once again our football friends on the pier and made our way to Rosario in the Argentine province of Santa Fe. First we steamed using our engine in an evening and a night ride on the Rio de la Plata, consisting of the rivers Parana and Uruguay. The stars above shone down on us and we were washing the coal dust
from the cargo holds. At the 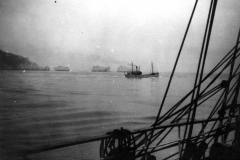 beginning of the Rio de La Plata, where we arrived at breakfast time, we stayed on half-left-side heading in north-westerly direction along the Rio Parana to our port of cargo-loading, Rosario.

No sooner than had we crossed the state border between Uruguay and Argentina, marked by a blue buoy, than a destroyer and two torpedo and two gunboats approached us on our port side at fast pace. The destroyer commander asked if he could pay the Pamir a visit. This was not an issue for us, and with a sleek motor launch, equipped with a waving flag and navy-blue-clad sailors; the 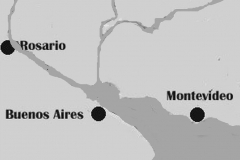 “Commandante” reached our ship and went straight for our perplexed captain to embrace him cordially. We were already afraid the old man would suffer a heart attack, as our guest took off his gold-laced hat, smoothening with the right hand, the medals and decorations on the left side of his uniform in order to then declare with a thunder like voice: “The Argentine Navy recognizes the heroic role that the Pamir played last September in Bahia Blanca, in the highest degree! The Pamir has thus made an invaluable contribution to the dictator Juan Domingo Perón to drive him out of the country. For that this ship and the crew thanks from our government, our Navy and our nation! However, because not all resistance has been broken, we will accompany the Pamir to protect them with four warships to Rosario. Consider our ships as an honour guard and a sign of gratitude of our people “!

Then “Commandante” asked us which good memories we brought along from Bahia Blanca. On everybody’s (trainees) lips suddenly there appeared: The song “Do not cry for me Argentina”. Commandante’s’ chest expanded to twice its size, his face turned dark red and his voice rose, “If you dummies think of having to sing the song of the dictator, then this will be penalized as a counter-revolution. He and also his late Lady Maria Eva Duarte de Perón who passed away in 1952 are considered as “persona non grata” and a ‘red banner’ for us! Thank your master and that this does not seem to be your own opinion, because if it had been, you would have to turn around right now. But I wish the Pamir a good trip and “by the way”: We are also building a sail training ship at the shipyard Rio Santiago with over 100 meters length. 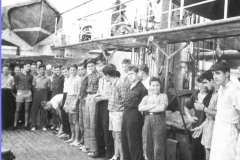 In two months, we are launching it (*).Come back and take a look at it. Just give me a call!“. Then he embraced our captain again and left. We made our way to the loading port, accompanied by four naval vessels and supported by a pilot
When the pilot wanted to communicate with the escort ships, 12 men of us trainees are standing on the upper topsail yard, we were ready to relay orders and confirmations with far-reaching sing-songs. During the night, this mingled with different voices from the marshy banks on the left and right shores of the river.

Later something went wrong in communications. Was it too dark, was the shore too loud, or were we imprecise? As the lines of the two gunboats were supposed to be lashed on bollards on the forecastle, they were instead attached to the windlass, the anchor device for heaving the anchor. When suddenly the lines were pulled in different directions there was a big short CRACK. The windlass was broken! We could still drop our two anchors, but cannot heave them up again! The boatswain said in a dry voice, that this could have happened just by looking at the old thing. Even before dawn, we knew that this would require a longer time of repair. First, we landed at the morning – in Rosario – at a grain elevator far from town.
Before that, we thanked and said goodbye to our pilots and the crew of accompanying ships by singing a song:

Hey sailors, hoist the anchor,
fills the sails, set the compass!
Goodbye my love! Leaving hurts.
>>Tomorrow we will hit the soaring sea.

Out there on the choppy waves
Wavering ships will shatter on cliffs.
In storm und snow I feel so sad,
>> that I must leave you my love forever.

A last kiss on rosy lips,
I fear not storm nor cliffs,
Foam you sea! Storm-wind, oh my!
>>If I could only see my love again.

And if I do not find back home,
and the breakers pull me down
deep in the ocean my love!
>>I will see you again up there! 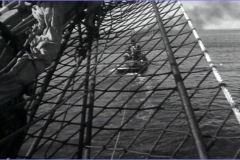 I sang fervently, soulfully as loud as I could. Not to say goodbye, but out of gratitude to heaven that the broken windlass would hold us for some time in Argentina, because without the safe use of it, the Pamir was not seaworthy. So were the rules.

But first we opened the hatches and metal trunks were stuck into our four hatches. 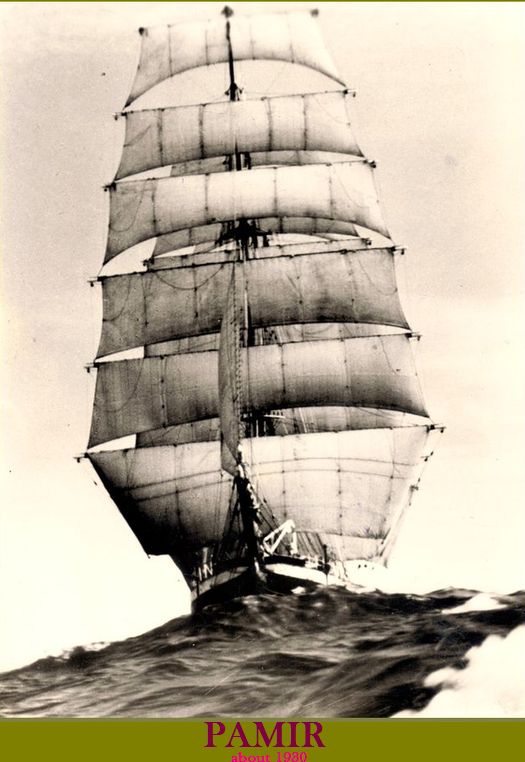