Report 29: Shark in the Baptismal font. 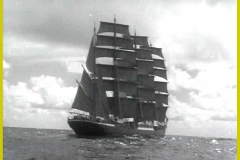 It was out of question. Baptism had to be at the equator. We had a few unbaptized newcomers on board, but those few must also arrive clean in the Southern Hemisphere. As had been achieved on the morning before baptism, the baptismal tub on hold no 2, port side, has been built.

It also happened to be the first day in 1956, and I, like a group of other older trainees, had heard from the training officer, during the 8 o’clock watch in the morning, that we were starting as “young men” today. This came as a surprise. None of us had thought a lot about it, because we had to serve 12 months before the first promotion was possible. But sailboat men learn fast, as some lawmakers had recognized, and the bonus for this was 50% surcharge on traveling time on board sailing vessels. From July to December 1955, six months that counted as nine months, and with Young Man ship school from previous April-June all of these counted as one year.

This was a big surprise, but then came a second medium scale one: a “larger lunch”, followed by a third surprise which all led to the greatest astonishment and speculation. Because most of them dedicated the New Year’s meal in fairs and crew quarters and the watch with the security officer solved a problem on the mizzenmast, a capital-shark had suddenly appeared in the baptismal pool.

From the water, one-meter-deep, he looked grim and showed his blank teeth. Immediately, the 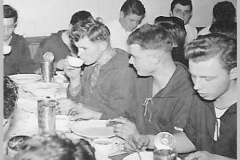 question on everyone’s lips was if some pranksters had caught the shark and then maneuvered it into the pool, or was it out of pure curiosity that sharks are known to have, so they jump on board by themselves to attend the baptism?

What to do now? It is well known that on sailing ships, since they sail the world’s oceans, the hunt for the shark with meat bait on a sharp hook is often practiced. When it swallows the lousy offer, it will be lifted, killed and cut into pieces on deck. I had never seen this with my own eyes, but have photos from Heinrich Hauser, that I had received a few weeks ago, which I studied closely (last image). 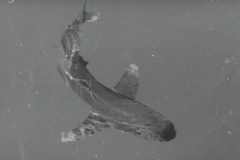 It looked very brutal. The discussion was now about whether we slay our uninvited guest or carry it back into the sea .There was probably another half dozen ideas that everyone exchanged with anyone. Among them was the one to take the shark to Montevideo to give it to a zoo. Ultimately, the principle of fairness won. This shark had not become a victim of the man against creature fight. We did not want it as supplies. It had come without our intervention into the baptismal pool. No one thinks of it as a trophy. The decision was clear: the shark had to go back into the sea. To do that, the port-loading boom from hold 2 was made operational, hung the whole water pool to the charging station, and hoisted it up high. When it 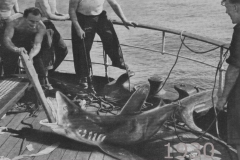 was like a wet sack hanging in the air, it was pushed over the port rail and then slashed by the boatswain. When the shark, eager for flying to freedom, the whole Pamir crew called out to it spontaneously with a loud “Happy New Year”.

Right after this incident, the baptismal pool was provisionally restored and re-filled with seawater. Then the ceremony began with the usual ruckus and lots of screaming and yelling. Those children were properly cleaned and released into the southern hemisphere with a baptismal certificate self-signed by Neptune in their hands.