After days of rain and cold, we departed about 8 hours after successfully shipping our airmail at the height of “Land’s End” and changed course from west to southwest. Although a large area of low pressure over the Atlantic had formed since the day before yesterday, it should be moving to the mouth of the English Channel by tomorrow, with around five to six Beaufort winds. Until Falmouth, everything was in balance. A breeze from South with 3-4 Bft winds. But now the low pressure area approached suddenly, 200 miles south of Ireland toward the channel, 100 miles off England and France, with strong winds increasing and directly from South. At 8pm there were 6 Bft, by 10pm 8 Bft, by 11pm 9 Bft, and at midnight at least 10 Bft. wind-speed. The barometer fell to 970 millibars. The Weather Service still reported wind strength 6-7, when our radio operator reported to the weather service: “No, here we are already in a severe storm with more than 10 Bft.”

Since the beginning of the night watch we were all on deck. Soon the Royal – and upper topgallant sails were blown away, shredded. In daylight it will look like a photo made by Heinrich Hauser in 1930 (see page 80). From yard to yard, we worked on securing one sail after another. 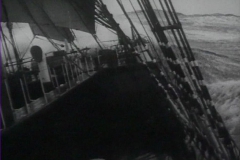 Finally, around midnight, there were only the lower topsails and lower topgallant set, but our speed on west course with starboard heeling of 30 degrees was above 17 knots. Repeatedly heavy breakers broke onto deck on leeside. Everything was all right, as long as nothing would go wrong now. But suddenly, it may have been almost 2am that the night was as bright as daylight from top to bottom. From a battery of a dozen spotlights, our ship was bathed in light from top to bottom. The shredded sails fluttered above and waves crashed down on deck. The radio operator made contact with the illuminator.

A French destroyer wanted to borrow our doctor for a short time: emergency surgery at the commander. Oh-man-oh-man, in this weather, with still more than 8 Bft “No problem” said the Frenchman, “we will pick up the doctor from the port tip of the foreward Royal yard with our new helicopter “Alouette II”

Our athletic medicine man agreed enthusiastically, and within 10 minutes, his ascend began to the Royal yard of the foremast. One searchlight rose into the sky. That had to be the helicopter. Because of the darkness, I could not see any details. Annoying, because I had never seen a helicopter, and certainly not in action. 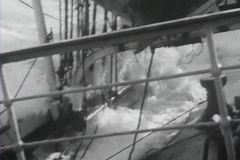 Only minutes later, the machine was hovering over us under it a man was hanging on a rope over 20 meters in length who was coming slowly toward our doctor, took him in his arms and slowly floated away together with him. Shortly after that, it was pitch dark again, and it took minutes being able to see again in the darkness. For now we had gotten rid of the doctor. At six o’clock, the wind died down to 6 Bft. For a tack, head through the wind to get on the southeast course, it was too stormy. Then the command came to gybe.

Here, the ship was brought to SO-course by turning right (to the north and east). This was achieved with the few sails that were still standing well. Each watch hoped to be sent below to be 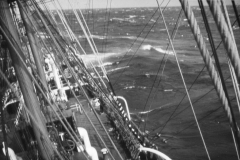 watch free. But first we had breakfast in two groups. Then the doctor was received back on the yardarm of the Royal yard of the foremast. After that, all the watches were sent below deck, only mine just had to change clothes from wet to dry – and had to remain on deck for the next four hours. The others should salvage the sail scraps and hoist new sails as of noon. My watch should then be off duty for eight hours – finally once again! 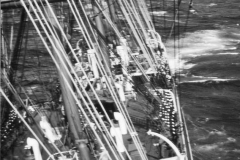