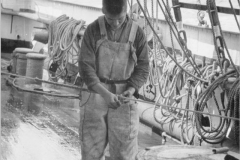 Though things happen on ship sailing, they actually cannot happen. On Thursday I returned from my vacation back to Bremen port. There the Pamir was loading coal for Montevideo, and I was immediately selected for the night watch from midnight to 6 a.m., a frosty night being expected. Shortly after the shift started, destiny took its course: because of the cold, I dressed using everything I owned. And on top of this, I put on my canvas designer dungarees which were quite wet and thereby stiff because of an afternoon rain shower while I was working at the windlass. 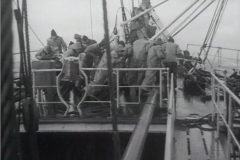 Because of a nearby airfield, a light had to burn on the top tip of the 55-meter high main mast. This was not burning at 00:30.The watch officer sent me up to fix the light. In the cold night, I climbed the mast. In a confined space and without essential movement I managed to light up the lamp in approximately 15 minutes. I found it to be a proud performance. Then there came the fright: I could not move, the pants were frozen stiff. The legs of my pants were frozen stone hard. I called for help but it took a long time before somebody on deck heard me and asked what happened? Finally two colleagues from the royal yard appeared. But, instead of lending a helping hand they almost laughed themselves to death. Very slowly they gave their advice to the watch officer on how one could lower me down using a rope. 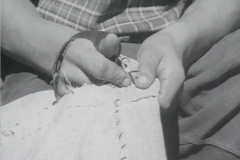 After an eternity the second boatswain Sven came to me, put the starboard Royal inner-buntline (with this line the sail is raised under the yard) around my breast, and bit by bit I reached the deck amidships because the line needed to be extended continuously. I still lay frozen stiff on the deck until a bucket of warm water from the galley thawed me up. 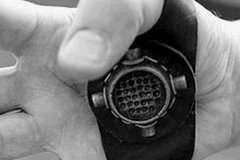 This event could have not have lessened the splendor of my great pants. The fabrication was like this: from the sail maker two pieces of canvas were requested, body size. One pi

ece of canvas was spread out on one hatch and you would lie down on your belly and draw by yourself or with the help of a third person the contours of the body from the ankles to the upper part of the chest Laying down with your back on the second piece of sail material you made sure that measurement fits up to your hips. Then sewing it all together with tarred sail-yarn, ad 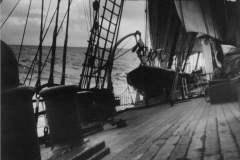 d suspenders and pockets by choice and other requirements. The elegance of the garment was not always obvious but its practicability was.

Night watch was over for me after returning on deck. The watch officer realized that because of my frozen state I tended to catch a cold and that I would not be fit to sail within two days. He dismissed me already at 01:25 to warm myself in my hammock. While falling asleep I developed warm air heating for the masts and yards, but I did not get far with this. I fell asleep too fast. For dungarees occurs to me the following remark:

If your pants are damp and wet, frost will reduce the designer’s joy!