Report 19: We and The Royal Yacht “Britannia”

Sailing in November in the English Channel, is uncomfortable. For 28 hours, we have been 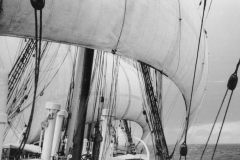 it. But with Beaufort 4 wind from SSW were set all sails and the Pamir made good progress. But life is full of surprises. The final coronation came this morning.

The command: “All men on deck immediately!” sounded loud and clear and every man rumbled up and lined up in rows. The first officer instructed us:
“The captain wants you here on deck again in 10 minutes wearing a white dress shirt, blue pants and bareheaded! What else you’re wearing underneath, you can keep it as you want. Reason: About 30 minutes ahead of us was Her Majesty’s Yacht “Britannia”, commissioned three years ago. Distinguished guests on board would like to see the Pamir under full sails. That should not be a problem for us. Now get on, you lazy bundles! In 10 minutes you are back on the mid upper deck, starboard side, lined up in one row!” 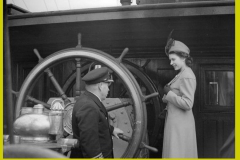 We obeyed, even if we cold went through guts and bones. After a few minutes, all stood on deck chattering their teeth. Then the yacht came. It was as long as our Pamir, only three times faster. To portside the crew had lined up wearing Navy uniform. Suddenly our radio operator rushed on deck and handed a telegram to the Captain:

“It is a pleasure, to accompany the Pamir for a while under full sails. Seven years ago, the UK has welcomed the ship enthusiastically as it brought a cargo of wool from Australia to London in late 1947. Even the Royal Family participated with great sympathy and sent me, the daughter of King George VI, Princess Elizabeth of York, on board. It was impressive to witness the majestic masts, access this proud ship for some time, and converse with the weather proven, proud crew of the ship. It is a special experience to see the Pamir now under full sail. Her Majesty’s Yacht “Britannia” salutes and sends best regards, for all time have a safe journey”

The Captain read the telegram till there, and then he stopped, the crew of the “Britannia” was saluting. 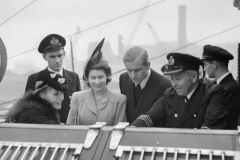 During salutations we saw Queen Elizabeth II appearing on the boat deck, her husband in the background. The wind was blowing her scarf and her handbag over her left forearm to the right, and with her right open hand she waved graciously three or four times over to us.
That was enough for us, because the white dress shirt did not protect against the cold wind.