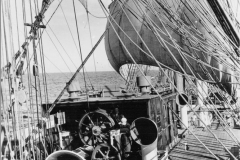 Until Hamburg, I really did not want to write anymore, because I

expected lots of work, making swift headway and many wet and cold days after we crossed the equator last week and had reached the latitude of Bermuda. From here, we wanted to sail rapidly eastward when reaching the west wind drift. However, before it happened, yesterday there was great excitement and bustle.

During the lunch break suddenly we heard a cry “All hands on deck”. Then the command: “recover all sails” For asking “why” and “what” there was no time left. Even without explaining, it felt unusually strange: The ship turned itself around. The captain hesitated and 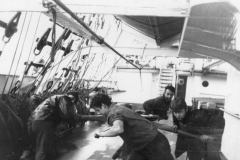 then yelled at the guards on duty, “Take a look! What a great vortex! If that speeds up it will form a deep eddy, and we will be in a tight spot. We have to get out of here!”

We looked closer at the sea just like watching a sink full of water, pulling the plug and water rushing down the drain, that’s what it was like right here. It was suddenly clear to all that we have reached the Bermuda Triangle. Was there any truth in all the stories about this place with ships 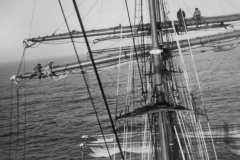 Only the captain was acting really cool: “We need to get out here. There is wind only at 100 meters height. We have to use it, like this: We still have some weather balloons. Fill them with gas Immediately. Bring the jib on the fore-ship. Attach to each corner of the sail a rope of 30 meters in length and connect the four ropes at the other end, along with a 220-meter long iron wire. Then five weather balloons are attached to the foresail, which hopefully will raise the sail to the wind region above us, where 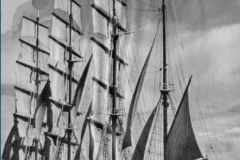 the jib inflates and then works like a paper kite. This will drag us out of there“

Despite great hectic pace, it was concentrated work. Even the machinists dragged the gas cylinders on their back from the engine room underneath the poop-deck. Each one looking over the guardrail, saw the huge lake spinning around us and our helplessness. The commands and the pace of work were intensified tremendously.

It took 10 or 20 minutes, I do not know, everything was ready for the start of the skysail. On command, the weather balloons were released. They slowly pulled the jib into the sky. On the side and the lower leeches we dragged and pulled to prevent it from getting caught our rigging. With breathtaking slowness, the jib rose higher and higher. When will the wind zone be reached, and the sail become our kite? There were probably only minutes, but for me it took forever until 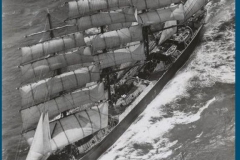 the jib ballooned somewhat and became faster than the Pamir. Careful balance was maintained between the wind-filled sail, until the sail was about 180 meters ahead of us. That was the moment to fix the cable on the front deck, in order to make the dragon to our tractor.

We quickly accelerated to 2-3 knots and could watch the giant water vortex. Exhausted and with peace of mind we realized that we are leaving the center of the vortex. Our sky sail worked heavenly. Soon we were drawn with almost 5 knots speed, always in the direction of the higher winds. The sail alone and the wind determined our ride, completely without our control.

When we could no longer see the water vortex which, as perhaps other ships before us experienced, could have been our destiny to sink, the captain gave the command: “Let go!” The connection to the skysail was cast off. The jib rose slightly, flew faster and disappeared in a wall of clouds. On the question of the III. Officer, why would we not go sky-sailing more often, I heard the captain say: “Jib gone, lines gone, balloons gone. It is too expensive”.

4 thoughts on “Report 18 – Sky sailing in the Bermuda Triangle”