Having heard Mozart’s clarinet concert buzzed by our colleague Erwin yesterday, this is a story that has to do with 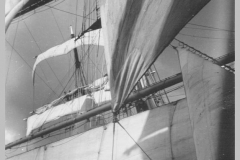 superstition. Nobods cared about each other’s quirk. Few cared about the fond likings of the others. But we were immediately informed emphatically: The captain does not tolerate whistling aboard! Never!

Only the whistle of the watch officer was permitted. The captain feared that any sound that could compete with the whistling of the wind in the masts could give the elements stupid ideas and could stop the wind or hit the sails with hurricane force. Since punishment like careening was no longer a threat, this meaning: to be thrown into the water on port side and being pulled underneath the ship with a rope to starboard side. 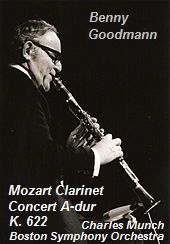 During one watch the delinquent now had to climb three times per hour from deck to the Royal yard within 15 minutes and keep lookout for the remaining 45 minutes – in any weather. Exceeding the time limit full repetition was due. Fear of being exposed to such a procedure was 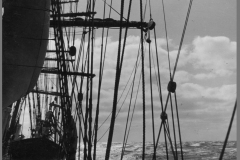 All had previously obeyed, but only half a day before Bahia Blanca, the captain rushed on deck and yelled at Erwin: “You’ve been caught whistling! Once after leaving Paranaque and now again! This has brought us the Pampero and will once again bring hardship. The four hour procedure shall begin immediately; so that the wind and the elements remain favorable”.

Erwin, a very quiet guy, seemed deeply affected, and stammered that he was not caught whistling, but was playing clarinet. Now stammered the captain that he had probably never heard of something as stupid as that and where the instrument was.
Then Erwin smiled and said that he did not need one in order to present the Clarinet Concerto K. 622 by Mozart sounding genuine and indeed as good as Benny Goodman has played it on 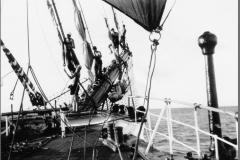 Now the captain turned red and seemed ready to burst, when the duty officer intervened and confirmed that the sound emitted by Erwin was the perfect reproduction of the clarinet solos. For this reason, the officer on duty did not object and let Erwin “play”. That stunned our captain completely. He asked if anyone else can confirm the officer on duty. No one said yes, no one said no, but some thought it could not be 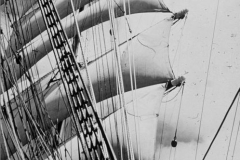 Benefit of the doubt!

The captain’s brow wrinkled, he looked straight at Erwin and said: “If you promise never again to present Benny on this ship, I offer you at the next opportunity to put your skills to work, namely with a concert in front of the entire crew at cargo-hold 3. But it turns out that I was fooled here, the penal procedure will be due twice! “. Erwin turned 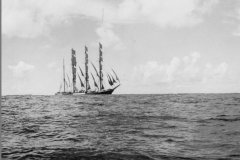 pale, squeezed out a YES and trotted away, with us others and with great relief.

Two days after our sailing show near St. Helena, and when we had reached the doldrums. it was announced that Erwin’s concert would take place in two hours time. We all gathered  in time and just before sunset at hatch 3. But first we heard an interesting introduction by Erwin’s savior, the II. Mate.

Erwin actually brought forth beautiful, melodic melodies in clarinet manner. To what extent this was a classic piece of the Mozart clarinet concert was close to Benny Goodman’s style, I – and probably all others – had no idea, but all heard that he portrayed a wind-instrument and it was no whistling. Erwin received thunderous applause. He thanked politely and then said loud and clear: “In Hamburg I’m gone!” 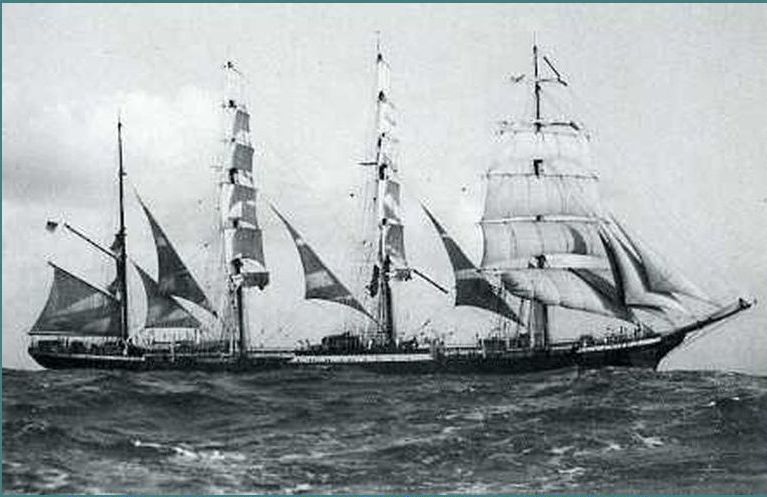