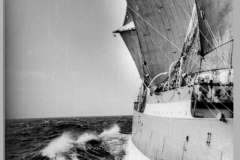 In early October 1955, we had caught the southeast trade winds southeast of St. Helena. Exactly 140 years ago, Napoleon Bonaparte on October 18, 1815 had been sent to this island with a small royal group of servants, we learned from the ship’s leadership, and for this reason, three large passenger ships had gathered with several thousands of tourists on board near the island. Since these were bored, the captains of the passenger ship’s had made contact with us and asked if we are able and willing, to demonstrate the great art of sailing for two to three hours. Since all agreed, and none of us asked whether from the rumors that of 650 US dollars per hour earnings – even a penny would be passed down. Anyway, we all wanted.

We had only two hours’ time to prepare. Starting from washing, combing and having to dress in clean clothes and we had to accurately line up all the ropes and lines. With full sailing power, we came across the ships situated five nautical miles north of St. Helena. Just like a Fleet Command, they laid in rows. With full speed, we raced past them at a distance of less than 200 meters Several thousand arms on each ship waved to us. A loud “OOH” and “AAH” from many mouths could be heard. The ship’s sirens hooted, the ship’s musical bands tuned in. 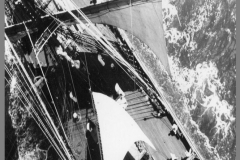 But we had no time for this. Pamir had to remain under control, and the first free program began, as we had passed the third ship. Then the command came: “Prepare to gybe”. Now the ship had to turn with the wind from behind by 270° in order to sail between the last and second ship under full sail. As soon as we sailed through between the bow and stern of two ships, the command came: “Prepare to come about!” Now when the ship was rotated 90° through the wind we sailed between the second and first ship. Then we turned the ship further, until it almost sailed a downwind course, with the wind from astern coming abeam and we passed very close to all ships.

This time we were even closer. Six men were at the helm to keep the ship on course within a degree. The wind heeled the ship by about 20° to starboard. The upper spars almost touched the top deck of the ship MV “Morning Victory”, where many passengers were standing and two stewards, who sat on a three-meter-high cowl. This became their doom. When the foot-rope of the Royal yardarm threatened to tear them from their seat, they grabbed it and they suddenly found themselves up in the air!
I have never seen people from the foremast climb to the top so fast in order to help those two 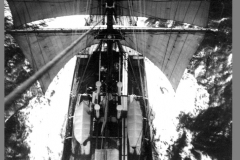 After ten minutes they were safely on deck. Now, good advice was expensive. We had sailed great maneuvers in the last 90 minutes, but returning the two stewards again, would also take some time. Therefore, the captain gave the order, yet to turn a pirouette: 360° around the right side. In addition, a part of the 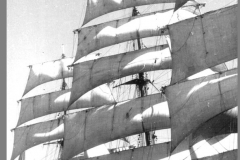 port watch should prepare a lifeboat. At the end of the rotation, we were barely 300 meters away from the “Morning Victory” and could catch a leash with a lifebuoy drifting near us. Agreement on all sides, life jackets were provided to the two stewards, tethered on a leash and taken back by their people after their jump into the water. Applause surged everywhere.

A transfer by boat would have lasted much longer. Again we turned the ship into a good close-hauled position with exhilarating speed and galloped past the armada even amplifying the cheers of the spectators.
During his stay on St. Helena even Napoleon would have been inclined to enjoy our presentation as entertaining. But if the last time he was there was in 1821, what were the tourists actually doing there? 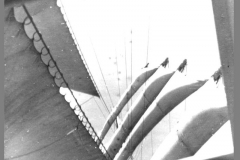