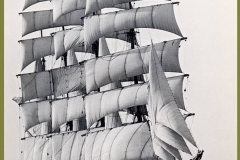 The wide Bay, surrounded by green Pampa, this has been engraved into my memory because of the song later to become famous, “Do not cry for me Argentina”. This was now almost a week behind us. We headed east, as if sailing to Cape Town, but we just wanted to use the Southwest–Passat winds to get across the equator. Thus one had to cross a sea area that was characterized by 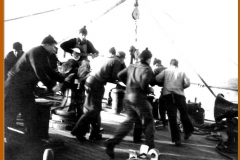 For days it was known that rescue boats should be launched and rowing should be practiced.

On Wednesday the time had come. Good weather, light seas and lots of whales around. Friendly and they looked impressive. Three lifeboats were lowered into the water. One half of the crew went on the boats starboard watch had to remain on board and should be next, but only in the afternoon. It all did not look bad, what the port-siders were doing. They soon were racing each other and then they steered right into a large group of whales. 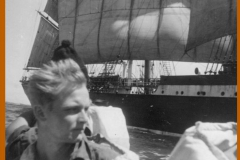 Then the ones left behind realized that the first officer asked the captain: “May we?” He had us hoist the signal flag for “YES” and immediately the first officer made it clear what he wanted, namely: riding whales!

He had handed the helm over to the second boatman and jumped off the rim of the lifeboat to the back of a whale and from there to the next, sometimes forward and back again. Soon others followed him not only from his lifeboat, but also from others. 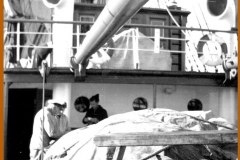 The hustle and bustle looked great, especially when a whale blew a huge fountain of water into the air, or one or the other did fall into the water and had to be retrieved into one of the boats with the help of ropes being cast or oars.

After an hour the captain had the signal flag “end” set. It took almost 30 minutes until all of the men came back from whalebacks or had been fished out of the water. The whales had apparently enjoyed the game. Neither they had used their tail fins aggressively, nor did they dive down or jump out of the water. When Captain Ahab, in the novel by Herman Melville, was furious and angry at the whale Moby Dick, he made him very shot-tempered or did the author tell us utter nonsense. Our whales were kind they never 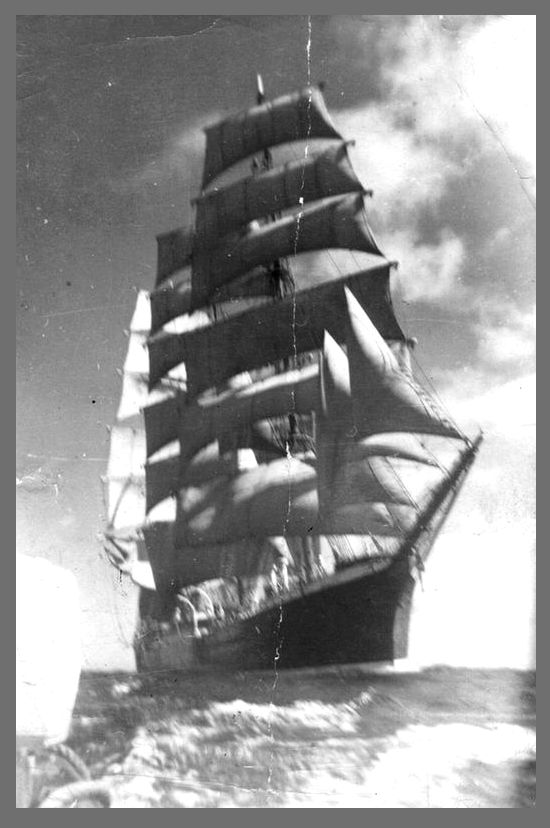 inflicted even a scratch on anyone of us.

Slaphappy the troops came back. After lunch break the starboard crew should commence with their exercises. Only the whales were gone. Where the others jumped on the whales, we had to row for three hours. We in front, the Pamir sailing slowly behind us.
Fair equal treatment looks different, dear whales!