Report 12: A Pampero is not a tango

Seven weeks of sailing workout completed in the cold, rain and strong breezes. The ship’s 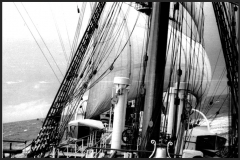 commander and we learned on the trip to the port of Paranaque to take control of the ship and the elements. Since leaving the first port of discharge, the Pamir sailed tilting to one side with nearly 35°C. It cut the waves majestically and rolled very little at best. Quickly we had to leave the tropical scents behind and sail within a few days the Argentine Bahia Blanca to take a full cargo of grain to Germany for agriculture. The port captain, off the deck of a crane cab and our captain up on the crosstree [1] had confirmed with touching words the eternal bond of sailors and the sea. We were released with great fanfare just as we arrived. And again the words of the pilots about Repetier-people were passed on to the sailors, who now were already untying the sails off the yards. A fresh southwesterly wind brought us back to the South Atlantic.

The following night promised recovery from shore excursions. My group starboard, Bravo, should stay up on deck until 8pm and then eight hours off duty until 4am. In fact, until dinner time we sailed fast, then very fast and immediately after nightfall the Royal, the upper and lower topgallant, topsails and the mainsails had to be recovered.

To the ever-stronger winds came cascading rainsqualls. Before changing of the guard, all men were called on deck. Each watch group secured a mast and the fourth watch secured the air vents, hatchways and portholes. The ship struggled heeling 45° through the water. At least 30 men were still busy with sail recovery in the tops, as a huge wind-blast hit and the cross-upper topgallant sail that ripped from the leeches and it fluttered up and down with the roar of a grenade launcher. The order came quickly: “cut them loose”. The sailor and his knife went into action. We climbed with five men into the foot horse under the top sail, the rope underneath the yard on which you could move: Two on port, two on starboard and one in the middle of the mast, from where came the command: “Three, two, one, let go!”.

Now, each of us chopped into three lashings in a matter of seconds. This worked perfectly, perhaps too perfect. Another heavy gust grabbed the wet and heavy 100 square meters of sail area; carrying it to 100 feet height and dropping it only 30 yards away onto the aft deck. It hit the jigger boom fully. Like a match, it broke apart, without uttering a sound. Now our team was in uproar just like the sea around us. A volume of 100 tons thundered in mountains of water on deck, leeward.

Whoever was standing there, was not only wet, but also had to watch well the water that drained, because there was a slight probability to end up with a shark washed up on board, and if it missed the exit, it’s jaws would be furious. Then it was only good not to get too close.
After struggling 7 hours with the elements we had everything under control, only the gaff sail 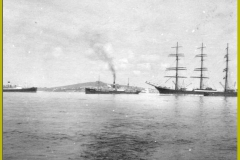 was broken. The captain explained that the sail adds little to the ship’s propulsion, but is important for course keeping, otherwise half the ship’s crew would have to handle the ship’s rudder.

We just held council and declared that while we would gladly work more it was: “Safety First”, and Montevideo, wasn’t unreasonable for repairs.

So, I got my first Espresso, so strong that it was simply delicious with 5 teaspoons of sugar. A one-day invitation to a family in the country was also included.