Report 7: Sailing with the trade wind 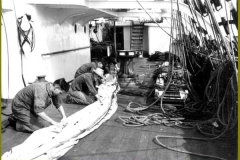 hand cleaned, chipping rust, painting and replacing everything possible. Scrubbing the wooden deck and oiling it, fighting rust and then preserving it with several new coats of paint, replacing cables and wire ropes.

When reaching the moderate climate at mid-latitude a complete sail change was pending. The winter sails had to be exchanged for the summer set, whereby the summer sails were nothing more than old winter sails. In other words, this was to keep the newer sail from early ageing in the sun and wind. The mature man tries to keep it that way as well.

The exchange lasted several days. The winter sails cut off and put in the locker, the summer set 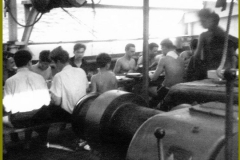 dragged from the storage space heaved into the respective yard height and struck with lashings of the frame. This was accompanied by the sail maker Jonas’ ballads sung off the topgallant of the mainmast. Each in the direction where a sail was struck, he formed a funnel with both hands toward those top hands working on the framework. The seamen and ordinary seamen who already knew a lot of text, agreed. We ‘boys’ were trying to sing along. Up to now I only managed to memorize this text:

Oh Neptune, you, ruler of the oceans,
Generating the winds from sun and mist,
Giving us wings to travel light from place to place,
If you exceed, it’s murderous.
Appreciate our deeds and work
For it is done for you by….. sameyoslas
(for me very vague, either sailors, monkeys or slaves)

Since replacing the sails had priority over all other work, the newcomers had to learn all handling quickly. For days, it had become more like summer. The north-west wind came swiftly, 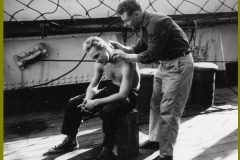 the same steady wind that helped Columbus to find America. I wanted to go there as well. His 100 ton displacement boat Santa Maria perhaps with 100 square meters total sail area stood against our 3.102,87 gross register ton ship with 3.600 m² of sails taking us closer to the coast of Brazil with a speed of 8 nautical miles an hour.

The wind from behind, under a clear blue sky with a few clouds, we pushed along with our ship’s length of 114.5m and a draft of 6.5m (max. 7.16m), a fuming bow wave before us, accompanied by several dozen dolphins that were attracted and presented great leaps in rank 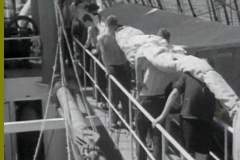 and file like a highly motivated ballet ensemble. Their merry eyes glowing. We the spectators were so touched that at first we did not notice the many flying fish that landed on deck and could not take off again on their own. Therefore, we, trainees, took care of them. It was funny to hold a flying fish that we picked up like a paper airplane into the air and make it fly with a small thrust. This succeeded only if the fish had no more than 8-12 minutes on deck and was not exposed to the sun. We always collected as many as we could hold in both hands and threw the

m over the ship’s rail in lee side with best wishes. 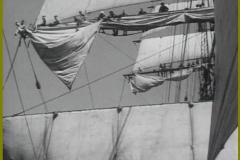 I don’t know if the rumors were true, that many of the cabin owners left their porthole open and intentionally brought the fish that landed in their rooms to the scullion for cooking. Some prefer to have a fish in their stomach rather than helping a flying fish make it back into the water.

In the evening, the off-duty watch sat in mild temperatures on top of hatch 3 and sang melancholic seamen songs, which a gentle breeze took out to the sea. The flying fish seemed to like it, because they flew numerously over us every once in a while.