Report 5: Saved by the hammock 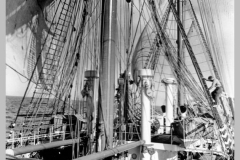 From day one, our safety measures have been hammered into our heads. “One hand for yourself and one hand for the ship.”

It was forbidden to stand on a yard or work without life-belt in the masts. That was a slightly tarred rope with a snap hook on one end. You would tie this rope around your waist using a bowline knot leaving 50 cm distance between knot and hook. Whoever clicked himself in at the top yard, hung in case of an emergency in the rig, but did not fall 20, 30 or 50 feet down on deck or into the ocean. “Safety first!” 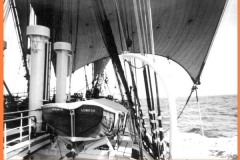 We the newcomers were eagerly waiting for the first boat maneuvers. Soon we were told: “but only in the doldrums at the equator or where there is no wind at all. Then we have more time for such an elaborate maneuver launching one of six wooden boats.” On our ship as compared to the Titanic this would be a bigger problem. For four out of six boats it would take some time and only thereafter two other boats could be cleared. When the ship is heeling half of the boats would presumably have to be omitted. Because it did not work out well on the Titanic it was advisable not to brood over our life-boats. In survival training, it was far different from what we thought. 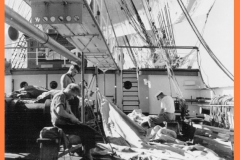 Without warning, the ship’s boys had to line up one morning with their hammocks near cargo holds 4 and 5 on starboard side. We had been given instructions on how hammocks are lashed, to occupy the smallest possible volume. Beyond that, it could act like a buoy made of thick canvass filled with mattress, blanket and pillow, if well tied to a tube, it could act like a buoy, at least for a short period of time. Then we were requested to put our hammocks together once again, optimally, very tight, firm and round, with the option that the owner of the worst tied hammock, had to prove its carrying capacity with a leap overboard in light clothing and a rope around his waist. Although I had lashed, pressed and pushed with all my strength, I was, how could it be otherwise, in the group of test persons. 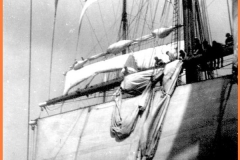 With a long line around the waist, held by two men, I jumped with 15 others, clinging to the hammock like a lover into the vast ocean. What a premiere! A small man in a huge Atlantic! I was floating like a plank on the ocean. Not for long though, but long enough to never forget that moment. I heard no yelling, not the gleeful laughter of the colleagues on board. It was so nice to feel the lightness of the waves that were not threatening, but had taken me almost lovingly in their boundless range. Then they tore and pulled me with the wet bag back to reality and back on board.

This impressive exercise made a first class hammock-packer out of me! From now on it laid perfectly packed in the storage space for hammocks, a place near the steering machine. 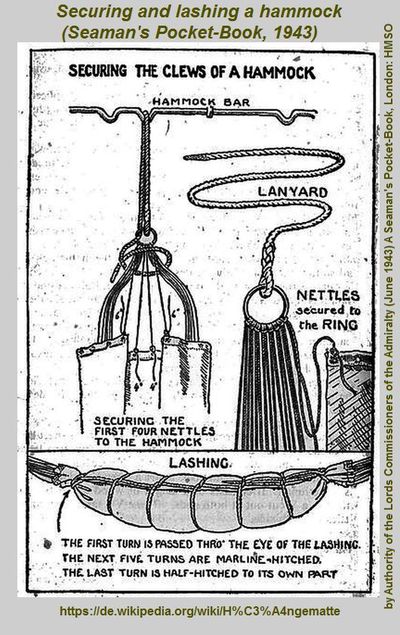