No time left to gather any impressions. I had just arrived from Bremen when standing on the teak

deck of the Pamir the 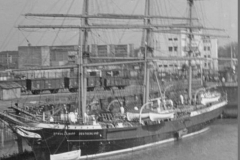 old gnarled boatswain growled at me and my colleagues: „Leave your things right here and carry these bags to the front of the ship“, this was his friendly welcome on board. A dozen bags were laying at the edge of the cargo hold, one for each of us. From here to the forecastle there were only about 20 meters. So whoops shouldering one sack and off we go – but what a weight!

I was tempted to throw the burden off my shoulders, but should the boatswain consider me a weakling on the very first day? No way!! So I carried my burden biting my teeth together. Since then I know shouldering heavy sacks is not my thing. The first day on board Pamir was overwhelming in every aspect. A genuine boatswain had spoken to us. The sun was shining brightly in the port of Hamburg, when we newcomers from the „sail training ship Deutschland“, of Bremen had climbed the gangway at noon, and we were quickly adopted by the hierarchy of the world of labor. 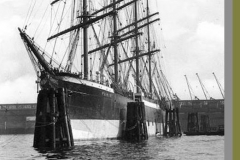 24 hours earlier I never even suspected that this might happen. Counting from 18. April 1955 I took part in a “pre-training course on board the training ship”. After three months of training, I was supposed to take an exam. This would have been difficult, because some parts of the lessons have not been understood until this day.

But on Wednesday 22. June 1955, five of us were unexpectedly ordered to see the head of the School for Decks Boys. „Pack your stuff! You will board the Pamir tomorrow 11 a.m. in Hamburg! Understood? In my Seaman Service Book it says laconically: “Arnd took part in the advanced training course lasting 2 months and 8 days with success! Signed: Captain”. I hope for such testing and performance results in the future.  On this day, all crew members ar 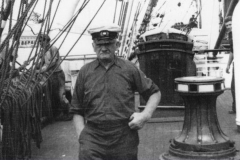 rived. Of the regular crew, who had already participated in the South America trip from February until June 1955, they came back from shore or their short vacation back home.  Some knew for many weeks that they would sail on the Pamir, while until yesterday I anticipated a two-year assignment on a coastal motor ship to Cuba.  Cuba-Libre and Cha-Cha-Cha would certainly have made an able seaman out of me. Life in Havana is supposed to be real cool. The prospective shattered.  For a 16 year old the Pamir was then somehow a solid and great dream anyway. Soon the newcomers from various ship boys schools were gathered, at least four dozen.

The rest of the crew added up to another three dozen men. There were lots of explanations but it was all Greek to me. Finally, we lay in the hammocks, and when you’re tired, you sleep like a log even with a bent back.  The time before sailing was hectic. Suddenly you were assigned to one of the four guards, each guard consistin 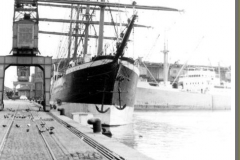 g of a dozen trainees. Two guards were placed in the aft in a room on the port and starboard room. These were the bedroom quarters, used as living quarters without hammocks. Along the inner walls small cabinets were installed for each of us; all clothes had to be stored within.

Living comfort brought tables and benches (wallpapering table design) from the ceiling. Here we will dine. There was little time for everything. Everyone was looking forward to sail. The cargo was on board consisting of coal for Brazil. This and that still had to be towed and stowed until finally it was said: „Let go fore and aft“. Pilot and tug brought us within sight of the riverside promenade close to the port of Hamburg, the “landing bridges”. From there we beckoned diligently. We waved and tooted back. That went on until the small town of Wedel. This kind of excitement can cause seasickness. At Glückstadt, after just four hours on the same 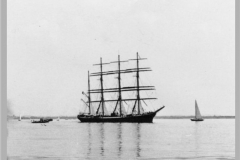 voyage, I puked ‘for God have mercy’, below deck in a quiet corner. With great fervor I removed the traces in a hurry to avoid predictable comments from others.